Walter Arzet exercised due diligence before deciding to go into the Heating Ventilation Air Conditioning industry. It paid off, though, because he found his true passion – and lifelong career.

Arzet, a 1986 graduate of Coyne College in Chicago, was undecided about what to do after high school. “I talked to people, and I went to the schools: three different schools, three different trades,” he says. “You want to get to the source of why people are doing it or don’t want to do it.” That meant talking to people who were working in the field before enrolling in Coyne’s HVAC program.

“I liked the fact that the teachers were down to earth; they told you how it was,” he says. “One teacher I can’t forget is Mr. Rontos. He would try to make us understand that [HVAC] is not an easy task, but it could be if you liked it. If you don’t like it, don’t waste your time. Do something else.” Arzet loved it so much that he said he could hardly wait for Monday to come around so that he could get back to class. “It gave me 100 percent confidence and opened up in me that I was able to understand wiring diagrams and the challenges because I didn’t know how much I was going to like it until I actually got my feet wet.” 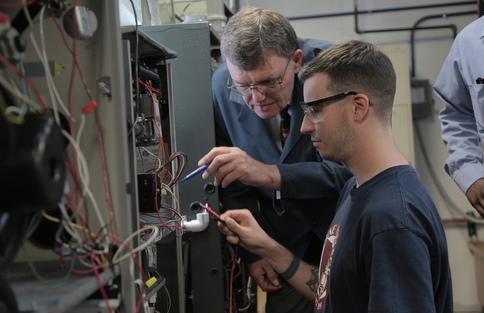 After graduation, Walter Arzet spent two years working for a company in Chicago that only dealt with window air conditioners, transom units and wall heaters. “I thought it was a piece of cake, and I wanted more,” he says. He then went to a sheet metal company that specialized in new construction and finally to a large HVAC company with multiple divisions. “I went to work for the residential side of it, and I found my love in there,” he says. “Maintenance, repairs, swap outs and once in a while we used to do sheet metal work. I landed in a good place.”

Two years later, the company relocated to the suburbs, and he was not a fan of the long commute. Arzet had a lot of friends and acquaintances who would ask him to do side work. “I thought it was a sign that I should probably move on. I was scared, but I sat down and thought about it and bought and equipped a van.” The timing was right because new management came in, forcing people to leave. “I prayed, and the rest is history.” That was about 20 years ago. Walter Arzet started his own business: Arzet Heating & Air Conditioning. “Right now I have five people working for me,” he says. “For the most part, we’re busy all year round.” 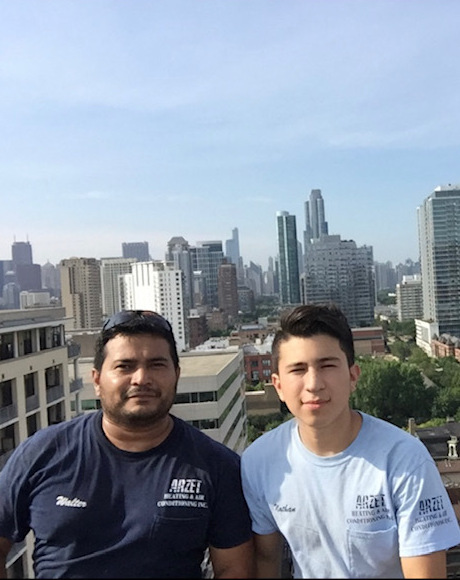 In September, the next generation of Arzets will be starting school at Coyne: Walter’s son Nathaniel. “I sent him to bootcamp for HVAC for about a week in Arkansas because I wanted him to get an idea,” he says. “He showed me the grades – almost all A+ – and he showed me the notes, the diagrams and the little quizzes that they made him do. I said ok, so he does like this.”

Even though Nathaniel has a talent and affinity for HVAC, Walter Arzet says he does not plan to give him a job. “I told him that I want him to get a job and work for a union company,” he says. “He definitely has the skills. He knows English and Spanish, and he likes this stuff.” Arzet wants to make sure his son takes his career seriously and sees how others operate before he works for his father.

For people who are thinking about getting into HVAC, Arzet says to talk to people and shadow someone, if possible. If not, check out YouTube videos on how to repair things. “I would tell somebody who wants to do HVAC that this is fun, if you like it,” he says. “You’re always going to be in an environment where it’s hot and humid. In the summer, it’s tough, but if you want to make money and you work smart and you work hard, then you’re going to make it.”

Walter Arzet is an outdoor guy who can handle the weather. “I like to be out there climbing ladders, fixing problems, meeting people,” he says. “The jobs are always different – each time and each day – and I get a nice feeling when I see the satisfaction of people when I fix it. It’s very rewarding.”

If you like working with your hands and have mechanical aptitude, consider training to become a heating, air conditioning and refrigeration technician. In less than a year, Coyne College can prepare you with real-world skills, hands-on training and individual attention from instructors who are industry professionals.

Contact Coyne College for more information or to register for classes.