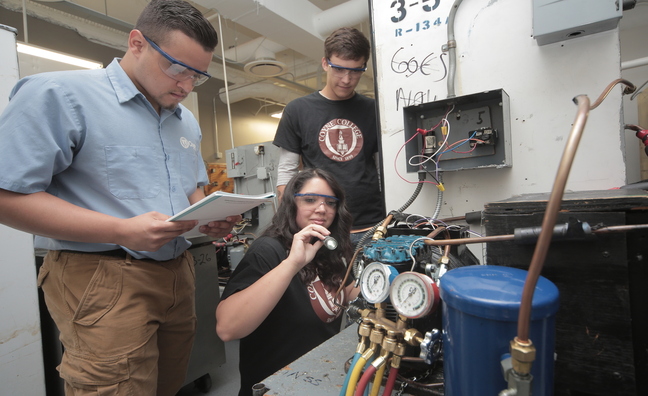 “Coyne was my first stepping stone to a better life. This is where I did my 180.” Hear from our graduate Yolanda Rodriguez on her experiences in Coyne College’s HVAC-R program.

Has Yolanda inspired you? Join the skilled trades and start your training at Coyne College.

Coyne was my first stepping stone to a better life because this is where I did my 180, my family wasn’t really supportive of me at first. They also called it a man’s job. My grandfather from my mother’s side was actually the first person to sit there and say, “that’s what you want to do, I encourage you to do it.”

The first day I met Mr. Rantos and I met my class, I walked in I was nervous. I was like, “What if I’m going to be the only girl? What are the guys going to think about me? Are they going to pick on me?” From the first time they saw me they were like, “a woman.” [laughs] I laughed, they smiled, I sat down and I kept to myself and they became family, you’re like my big brothers.

I went in there at first feeling like, “Nobody is going to want to work with me, I’m a woman.” I’m thinking all these negative thoughts, but then in the end they were asking me questions and my opinions. Not only did I become a tutor, but I was making bonds with the teachers. They were letting me teach sometimes, they were letting me express myself in ways that I couldn’t even imagine.

I want to tell women that it’s possible. That you don’t have to fear, just go with it. You don’t have to settle in for any negativity whatsoever. You can overcome it. I know it’s hard, it’s very hard, but it takes a lot of practice, takes a lot of courage within yourself to overcome it, but it’s possible. I know that because I did it, I graduated with a 3.9. I was valedictorian and I felt like I really made the impact because I had that will and I made that way, I chose my way.