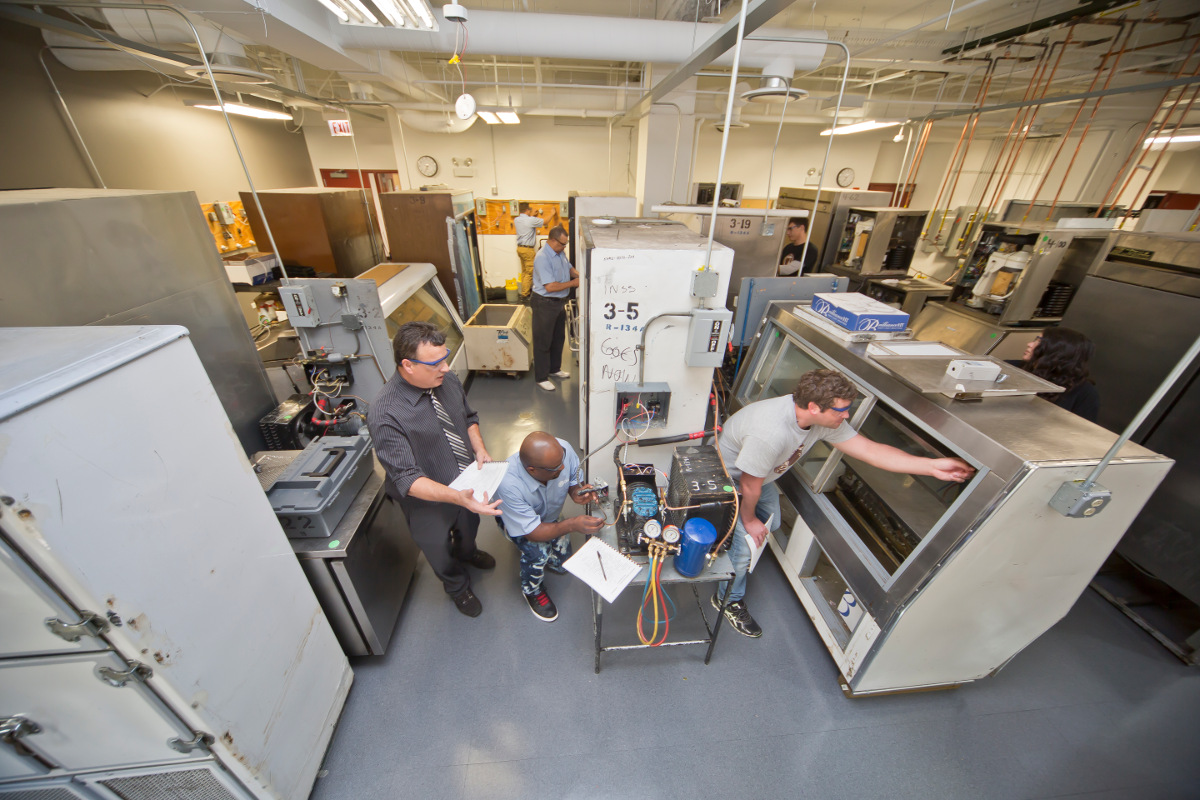 Nathaniel Brand completed Coyne College’s Heating, Air Conditioning and Refrigeration (HVAC-R) program in February 2017. “I wanted to do HVAC because I like fixing things,” he said. “That’s a huge part of it. I love helping people and fixing things. This is the way to do it. I can go help people out with whatever they need, fix whatever needs to be fixed.” Nathaniel completed the program in just 18 months, graduating with his associate of applied science degree.

Before his journey at Coyne College, Nathaniel did what many people do right out of high school and enrolled in a four-year university. He started his education at the University of Wisconsin – Whitewater to pursue a degree in business and human resources. Within the first semester, he knew it was not the route for him. “I couldn’t do it anymore, couldn’t sit behind the desk. I got way too bored. I had to do something that made me want to get up, something that I could be walking around and doing things.” In the meantime, Nathaniel worked at a local arcade fixing games that were broken or damaged. It was within this position that he truly learned how much he enjoyed fixing things and working with his hands. He did that for one year before beginning work at UPS loading trucks.

While working at UPS, Nathaniel began researching programs and schools. Factors that were important to him were finding something he was passionate about and finding a school that understood he needed to work at the same time. “My whole life, school has not been the easiest thing for me,” Nathaniel explained. “I went to Whitewater and did the HR thing and honestly, I struggled really hard there. I studied constantly to get my work done and it was really difficult for me.” He was adamant about not repeating that cycle. He wanted to find a school where he could excel because he was both excited about the material and able to juggle a job, as well. He ended up at Coyne, thanks to a friend’s suggestion. “I got recommended to Coyne by a friend of my mom’s. I looked into it, went to an open house, fell in love and started classes two weeks later.”

With Coyne, Nathaniel achieved the best of both worlds. He left work at UPS after one year because he got hired on part-time at a local HVAC company while still in school. The company he worked for was just five minutes from his house and down the street from the train station. He would take the train every day to Coyne, get back in the afternoon and go straight to work until the evening. How Nathaniel got the job is pretty amazing. One day he was walking down the street and one of the guys who worked at the company saw him in his Coyne shirt. The man asked Nathaniel which program he was in, to which he replied HVAC. He told Nathaniel to give him a call and then hired him just a few days later!

When he finished classes in February, he got hired on full-time. Nathaniel’s original position was to be a helper on the install team. He would assist with installing new air conditioners, boilers, furnaces, etc. to learn the appropriate processes and best practices. “That was in February and now, since the last week in April, I bought my own work truck and I’ve been running strictly service. Cleanings on air conditioners, trouble-shooting and fixing problems.”

The excitement in his voice is easy to pick up on as he talks about his career. “I love it. That’s really all I can say. I love it,” he expressed, detailing that “with traffic, I drive five minutes to work. There are only four technicians there. It is a family-owned company. It’s me and one other guy who aren’t in the family, but we feel part of the family. If I have trouble on a call, I’ll call the owner or the owner’s son and they’ll walk me through step-by-step on the phone to help me solve the problem.”

The Coyne shirt may have been what helped Nathaniel get in the door, but it was definitely his hard work and the skills he learned throughout the program that turned it into a full-time position. “It was everything I learned at Coyne that I have used and still use to this day. Literally the stuff I go back to the most, especially what I’m doing now, is that first class. As long as you know the basics you can walk your way through a furnace and figure out what’s wrong there. Coyne is very good at showing you how to go step-by-step instead of rushing and looking at a bunch of random things.”

He attributes that rich, interactive learning experience to knowledgeable professors. “All the professors worked in the field for a while. So, not only did we have lab time, which was always fun because you got to work on the equipment, but even in the classroom, taking notes, they were telling you stories about stuff they were doing in the field. Things to look out for, what they encountered.” Moving forward, Nathaniel plans to just keep learning as much as he can. His company is sending him to continuing education classes for specific things to keep up-to-date on the field. His very long-term goal, maybe 20 years from now, would be to start and run his own HVAC company.

Reflecting on his experiences, Nathaniel has learned that the best thing he got from Coyne was “the knowledge that the teachers give you, not from the book but from what they’ve gone through in the field. They would tell us stories and I would be like yeah right, but then it’s happened to me a thousand times.” So, for any student sitting in the shoes he was in not too long ago, Nathaniel would say, “Just listen to what the teachers say even if it sounds stupid. Some of the things I think of that sounded stupid are the things I do every day now. Without them telling me that, I would not be as successful as I am today.” 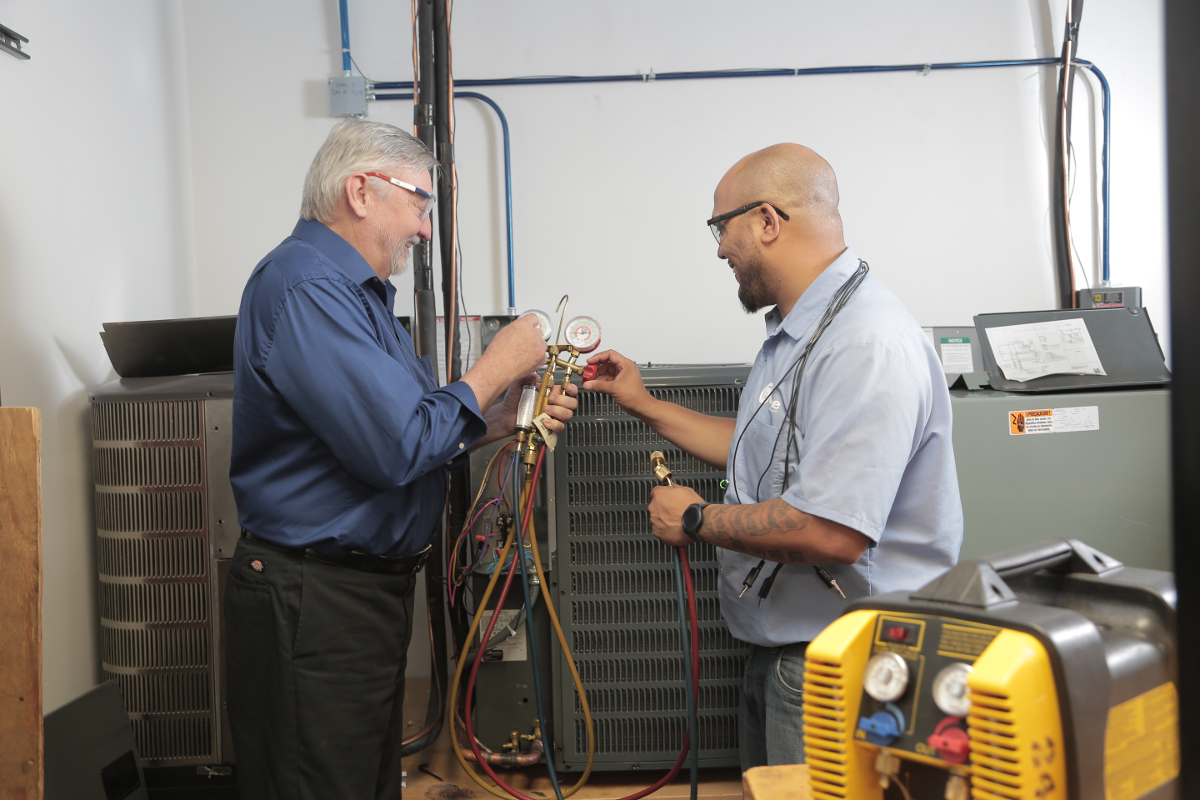 Word of advice from our instructor Tim Lesh, “Show up every day, on time, and have an eagerness to learn”! This week’s faculty spotlight is HVAC instructor Tim Lesh! He grew an interest teaching after many years in the field and saw the need for more HVAC professionals. Hear more about our HVAC program and Tim’s advice to students! For more information on the Coyne HVAC program 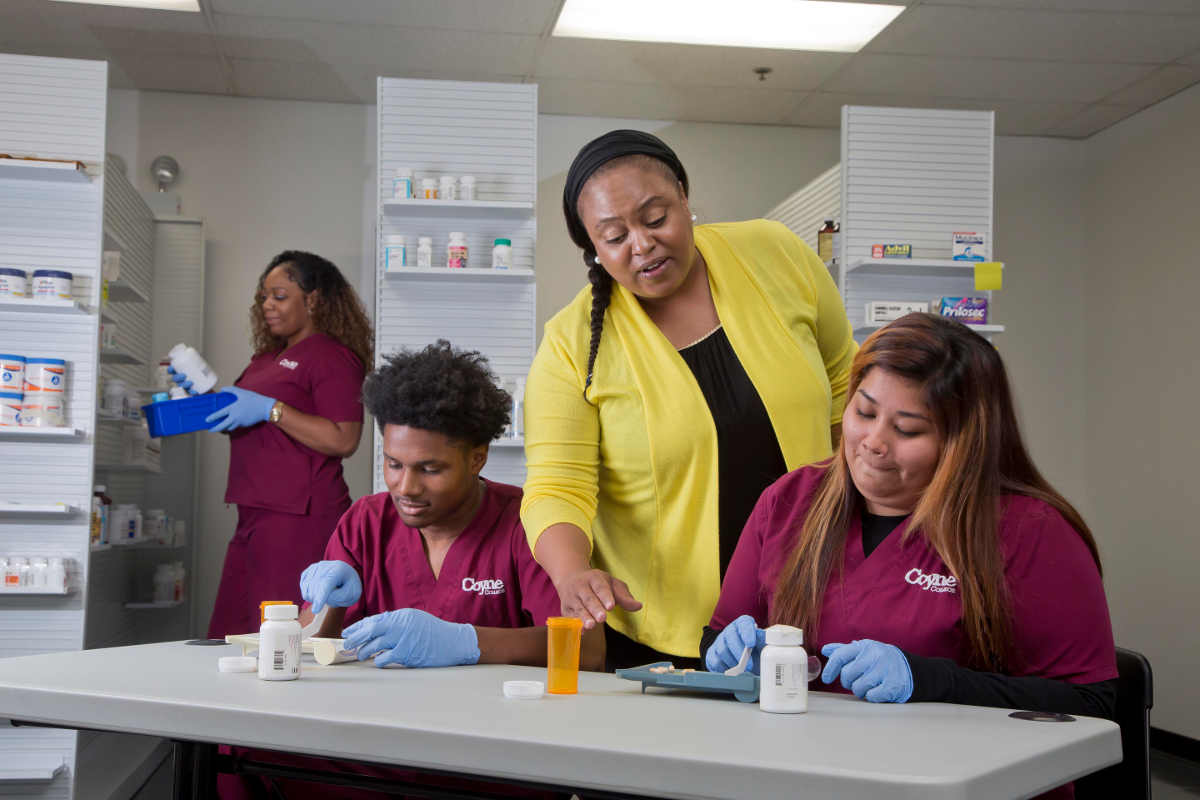 “As long as students are willing to adapt to change and learn something new each day they are going to impact and change lives”, hear more from our Pharmacy Technician Instructor Ravyn Bolton through the pharmacy technician faculty spotlight! Learn about her experience, teaching at Coyne, and advice to students!

REASONS TO CHOOSE COYNE
1. Training programs focused on in-demand careers such as medical assisting and HVAC.

3. Flexible schedule options – we have programs with day and evening classes so you can find the option that fits your needs.

5. Over a century of career training experience as well as skilled faculty and staff to help you succeed.

Visit the Coyne College Website for more details about programs and start dates.